CPC 2.0’s navigators specialize in Medical Assistance and MinnesotaCare enrollment. They can help you enroll in a private insurance plan and provide basic insurance education, but they cannot give you advice about picking an insurance plan.

CPC 2.0 offers CDCS services (Consumer Directed Community Support). CDCS is a service option available to people on the home and community-based services (HCBS) waivers and Alternative Care (AC) program. CDCS gives a person flexibility in service planning and responsibility for self-directing his or her services, including hiring and managing support workers.

Because our professionals understand the impacts race and poverty have on a community CPC 2.0 is diligent in ensuring our community receives health equality/health equity and culturally specific training, education and advocacy to support the overall health and wellness of the entire community.

Here are some of the facts about African Americans and diabetes:

Diabetes is particularly common among middle-aged and older African-American adults. The proportion of the African-American population that has diabetes rises from less than 1 percent for those younger than 20 years old to as high as 32 percent for women ages 65 to 74 years old. 28 percent of women and 19 percent of men ages 50 and older have diabetes. In just 12 years, national health surveys show that diabetes’ prevalence for African Americans ages 40 to 74 has doubled from 8.9 percent in 1976-1980 to 18.2 percent in 1988-1994. In the 1988-1994 National Health and Nutrition Survey (NHANES III), 11.2 percent of whites ages 40 to 74 years had diabetes compared with 18.2 percent of blacks.

Death rates for people with diabetes are 27 percent higher for blacks compared with whites. Diabetes is the fifth leading cause of death for those ages 45 years or older.

The prevalence of high blood pressure in African-Americans is the highest in the world. Also known as hypertension, high blood pressure increases your risk of heart disease and stroke, and it can cause permanent damage to the heart before you even notice any symptoms, that’s why it is often referred to as the “silent killer.” Not only is HBP more severe in blacks than whites, but it also develops earlier in life.

Research suggests African-Americans may carry a gene that makes them more salt sensitive, increasing the risk of high blood pressure. Your healthcare provider can help you find the right medication, and lifestyle changes can also have a big impact.

About 189,910 new cancer cases were expected to be diagnosed among blacks in 2016. The most commonly diagnosed cancers among black men are prostate (31% of all cancers), lung (15%), and colon and rectum (9%). Among black women, the most common cancers are breast (32% of all cancers), lung (11%), and colon and rectum (9%).
African Americans have the highest death rate and shortest survival of any racial and ethnic group in the US for most cancers. A continuous reduction in cancer death rates in blacks since the early 1990’s has resulted in more than 300,000 cancer deaths averted over the past two decades. Death rates have dropped faster during the most recent time period in blacks than in whites for all cancers combined and for lung, prostate, and colorectal cancer (in women only). As a result, racial disparities for these cancers have narrowed. In contrast, the racial disparity has widened for breast cancer in women and remained constant for colorectal cancer in men, likely due to inequalities in access to care, including screening and treatment. 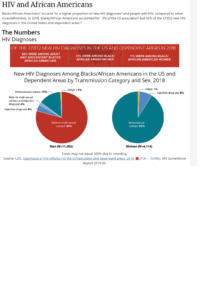 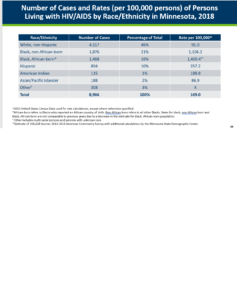 The files below present statistics on the number of cases of Chlamydia and Gonorrhea in Minneapolis from 1998 to 2012. Data elements included are:

Chlamydia and Gonorrhea cases are broken down by race/ethnicity, age, gender and communities within Minneapolis.

Data Source: CDC, The Minnesota Department of Health, HIV.GOV and The City of Minneapolis